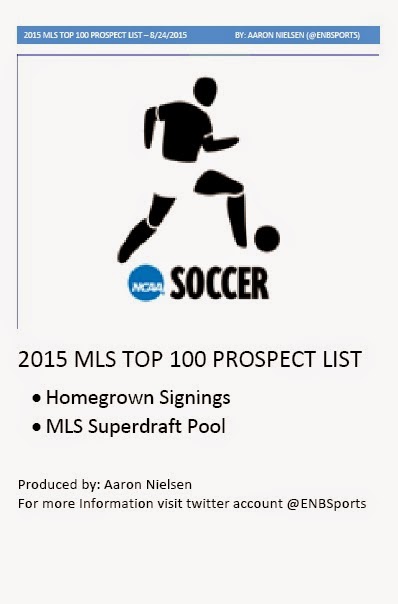 Click on above photo or title to view book

Showcases the top 100 prospects for the 2015 MLS Draft and Homegrown signing period at the beginning of the 2014 NCAA College Soccer Season. I also added “a scout’s view” further information on some players based on the view of a North American Soccer Scout and, a recap of the 2014 prospects and a companion piece rating the top 100 players in World Soccer under the age of 20 years old.

We also did a Gaffer & Hooligan Podcast on the topic

We wrap up the show with Segment 2 “Last Call” looking at a few teams position of need and suggest a few players.

As always you can let us know your thoughts by tweeting us directly@KamalHylton & @ENBSports, leaving a comment underneath this post or on the Gaffer & Hooligan Facebook Page and find us on the War Room Sports Podcast Network and PhatzRadio.com.

Posted by enbsports at 5:34 PM